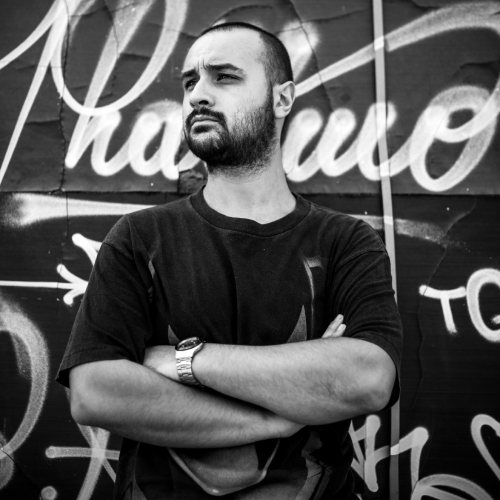 Biography:
Born in 1989 in Beirut, George Khoury (Phat2) is one of the major figures of the Lebanese and Middle Eastern graffiti communities. Phat2 developed a passion for graphic arts at a young age and naturally turned to graffiti, quickly learning to handle the spray can with agility. Influenced by the works of American pioneers, he gradually defined his own style, combining increasingly complex lettering with ever-vibrant colors. The name Phat2 quickly appeared everywhere in Beirut: his pieces were easily identified and he became one of the most present graffiti artists in Lebanon within months, whose discipline experienced a particularly strong growth in the 2010s.

Statement:
“After a decade of prolific activities in the street where I left my colorful imprint on the Lebanese capital, I am now focusing on a new chapter in my artistic career. I took a step back by moving away from the bustle of Beirut to settle in the heart of the Lebanese mountains, where I draw new inspiration and find the serenity necessary to create. I continue my work on forms, abandoning colors for black and chrome, further emphasizing my graphic and technical research. Focused on contrast, repetition and movement, my work is dark, sometimes bleak but it always suggests hope through a halo of light, like an echo of the events that took place in Beirut which strongly influenced my creation. The Withdrawal Catharsis series, still in progress today, is the culmination of my work started in 2017, and I continue this journey towards abstraction, between shadow and light.”