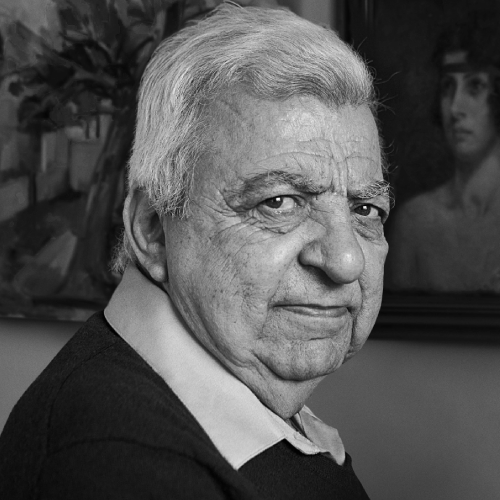 Painter, Mural Artist, Scenographer. Lebanon Former Professor of higher education at the Lebanese University – Institute of Fine Arts. Former Professor at USEK – Holy Spirit University of Kaslik. Member of LAAPS – Lebanese Artists Association for Painters and sculptors. Born in Beirut in 1940, and brought up in the scenic region of Msaitbeh and Mazraa, the artist’s childhood created the canvas for what would become an enduring love of landscape art. In 1970 he was granted a scholarship by the Lebanese University for a three-year in-depth study of art in France. After specializing in Scenography, the art of designing theatrical scenery, and mural art at the ENSAD – École Nationale Supérieure Des Arts Décoratifs – in Paris, he returned to Lebanon to teach at the Lebanese University – Institute of Fine Arts and University of USEK. From 1973 to 2004 Jamal Maalouf taught and inspired students who would go on to become masters in their own right in the fields of Fine Arts, scenography, architecture and interior architecture. Many of whom collaborate with him and create art to this day. In 1989 he was promoted to the rank of Higher Education Professor by virtue of a decision taken by Michel Eddé, the then-Minister of Education and Higher Education. This is the highest rank for university educators, after which he was appointed as a member of the committee, trusted with the authority to study teachers’ folders and assessing their eligibility for professorship. The artist’s work has featured in over 100 exhibitions till this day both locally and internationally. He has created sets and worked on more than 12 scenography projects for illustrious theatre plays between France and Lebanon. After being awarded a medal by the president of the Lebanese University on his retirement, and a brief hiatus from the world he knew so well, today the artist can be found enthusiastically contemplating breakthroughs in his newfound passion, abstractionism. He uses this renewed vigour, to bring to life the ideas he had when he was younger.

Throughout his years, while there was destruction happening in the country, Jamal Maalouf was painting the beautiful side of Lebanon, the nature, the houses, the landscapes. This was his way to saw light and beauty where there was darkness, pain and war. The one credo he has always preached is “to be honest with oneself”. And it can be seen in the lifetime of work Jamal has created. Carrying a piece of him, his childhood, his experiences, his struggles, his triumphs and manifesting themselves in the genius we know as Jamal Maalouf.