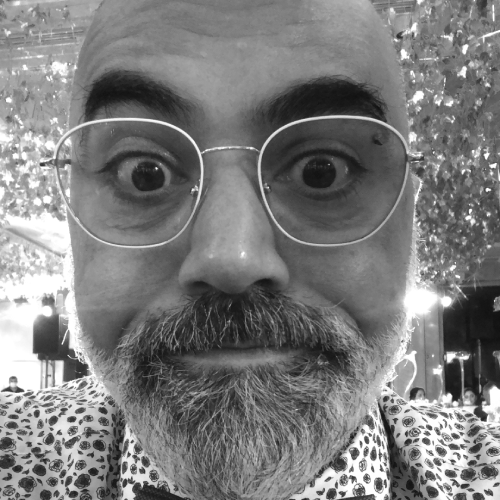 Biography:
Maroon Asmar, a Television and Documentary director by profession, is a self-taught artist based in Beirut. In 1997, Asmar delved into the world of installation art; and after a while of exploration and experimentation, he found himself a niche in this world. Asmar’s skillful transformation of 2D and 3D objects is translated into powerful emotional pieces of art. Following his debut exhibition at the French Cultural Centre in 1999, Asmar presented his work in over 13 solo and collective exhibitions. Following his last exhibition in 2000, Asmar divided his time between his daytime job and the collection of objects with stories from different parts of the city. Most of his collection came from items left behind after or due to “accidents”. The relationship between these objects, the “accidents”, and the emotions they provoked, became a very intriguing subject for Asmar to explore in his art.

Statement:
“Broken glass shards, wilted flowers, and the remains of machines are all elements that metamorphose and re-emerge within an innovative composition. They allow us to see the beauty and light in that which is broken and shattered. And so, handful of nails turn into shiny constellations, and a bouquet of wilted flowers into an everlasting remembrance of love. Turning bad energy to good energy.”