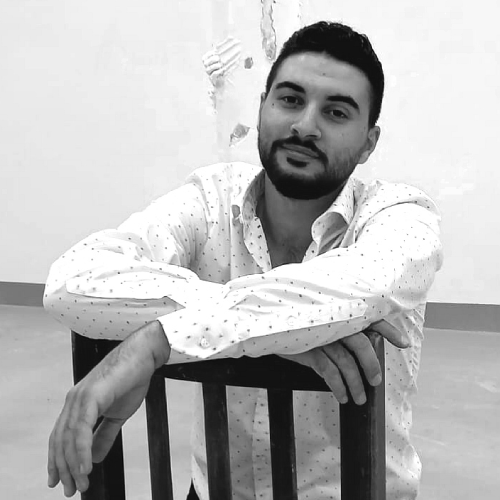 Biography:
Merheb Merheb holds a master’s degree in plastic arts with distinction from the Lebanese University, Faculty of Fine Arts and Architecture, and participated in collective exhibitions in Lebanon. He won the Bnachii Prize for Painting in 2016 and 2019, after which he participated in a joint exhibition of young artists with Gallery Loggia, in Anfeh – Al Koura. He also represented the Lebanese University in a forum for cultural exchange and the promotion of artistic skills in the city of Tetouan – Morocco (at the National Institute of Fine Arts) and participated with young artists from Spain, Egypt, Morocco, Portugal, France, and Lebanon.

He received a grant from the American Embassy in Lebanon to complete graduate studies (Master’s degree) in plastic arts, majoring in murals and art installation in 2020, and participated in group exhibitions in Jdeideh – Beirut with the Lebanese Artists Association, and  in the Ghazir Symposium and the Lebanese Creative Symposium. Merheb won the first prize of the Beirut Blast Masterpiece Contest Art, with the most artistic work expressing the tragedy of the Beirut port explosion, and he was chosen as part of a stonemason restoration and sculpture project with the World Monuments Fund , the British Cultural Center, and the Ministry of Culture-Lebanon.

Merheb is a member of the Lebanese Artists Association, the Lebanese Art Forum, the Fine Arts Forum, the Damietta International Society for Plastic Arts in Egypt, the Arab Whole Forum, the Creators of the World Foundation in Canada, and he was honored by the Colors Tales Forum in Lebanon.

Statement:
“My thoughts evoke childhood scenes that revive the ancient houses and the almost ruined castles, places that I used to grow up with, play with, and even resort to. These fragmented places are the source of perpetual silence. In their eroded walls lie movements and impulses when I touch their stones and sit beside them. I transform the state of demolition and ruin from negativity to aesthetics — more like a contradiction to the concept of identity that relies on the cultural heritage and details of spaces/places.
The human body is a place within which emotions and feelings lie. We stand in front of bodies that have a memory that sees and monitors the human suffering and the crack that afflicts life. When voices rise up in shapes, this allows for the weaving of worlds of meanings that are difficult to classify, and in a world that is overwhelmed by materialism and noise, in which Man has lost his true inner voice, the sound awakens in our depths the visual memories. These bodies reflect the state of internal alienation that erodes our common conscience.”