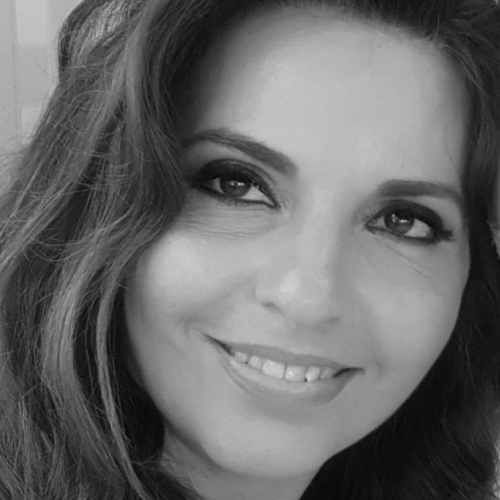 Biography:
Paulette Touma Eid is an architect, painter, sculptor and Junk artist born on the 19th of May in 1967. Since the age of eight, Paulette discovered love for art and decided to start developing her skills in portrait sketches. After graduating high school in 1987, she enrolled at the National Institute of Fine Art in Furn el Chebbak – Lebanon to pursue her major in architecture. Inspired by many architects and artists like Zaha Hadid, Frank Gerry and Andy Warhol, Paulette was the first in between her colleagues to present her projects on Deconstructed Architecture. Such masterpieces included the making of a Museum of Pop Art, which helped her earn her Master’s Degree in 1994 with a distinction. After that, she worked in two big firms: as a Senior Architect at Builders Design Consultant (BDC) from the year 1994 till 2005, and then as a Project manager at Associated Architects and Engineers (AAE) from 2005 till 2010; where she was able to design some of the biggest projects that included hospitals, hotels, malls, villas, residential and office buildings.
Paulette soon became a freelancer and co-owner at Paula & Naji Eid Architects (PNEid Architects) in 2010, which allowed her to focus more on herself as an independent artist.
This brought about Paulette’s first personal brand as an artist called “R.tistPola”, where she specializes in Visual Arts, Paintings and 3D wire paintings, Polyart Sculptures (made from papier mache, resin), Upcycled Sculpures (made from trash), and Furniture Designs (artistic stools, tables and panels). Paulette won prizes such as the 2013 1st Prize Award for Sculpture at the Jamhour College, and the 2016 1st Prize award of the “Age of Recycling” competition at the Modern and Contemporary Art Museum (MACAM) where one of her upcycled sculptures remains in the museum. She participated in several exhibitions, including: the 2017/18/19 Hippodrome de Beirut, 2018 Symposium Aley, 2019 les Jardins de Mzar, Faraya, Sursock villa, Achrafieh, ABC mall Achrafieh, KED karantina (Waste management coalition awareness). Paulette has also contributed to workshops in upcycling for schools & non profit associations such as the 2016/17/18 Volunteer at L’ECOUTE Association,  2019 International College Beirut (IC), 2020 International College Ain Aar (IC) Online session, and Training guides in how to Reuse & Reduce items we use on daily basis to save the planet. This journey has sparked up Paulette’s interest in Upcycling even more, as she now focuses on creating Art Gems from pieces of junk, in order to give them new life and meaning.