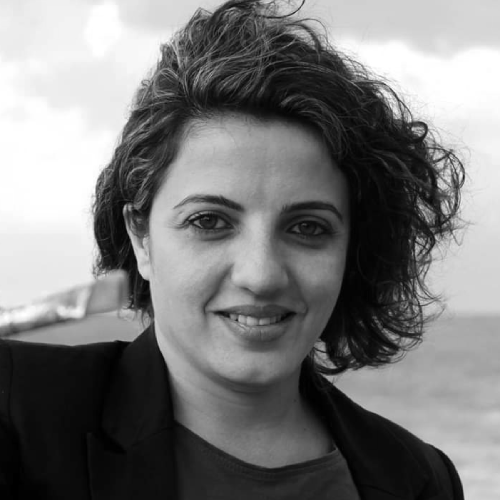 Biography:
Born in Beirut on 1977, Chris Assoury holds a B.A and a Master’s degree in Fine Arts from the faculty of Fine Arts and Architecture FBAA2, Lebanese University. Her Master’s degree project “Uninvited” was presented in 2020 to the Lebanese University, a Sound/Visual art installation that questions the relationship between the environmental sounds and the visual perception. The thesis presented to the jury in 2020 titled “WALTER DE MARIA, BETWEEN SOUNDS AND VISUAL PERCEPTION, THROUGH BERGSON’S THEORY”, is connected theoretically to the practical project. As for the Bachelor’s degree final project “Golden fragments” in 2018, it was about “Involuntary Memory”, an art installation that mixes images of the memory and their distortions. In 2013-2014, Assoury was a fellow in the full annual “HomeWork Space Program at Ashkal Alwan, Lebanon, contemporary arts. She holds two certificates: one in plastic arts from the Russian cultural center in 2007 and the other in Byzantine iconography painting from “Contempo Art Lounge”, Dbayeh. She attended professional photography sessions, film-making, SFX, molding classes and many different workshops and seminars led by art centers in Lebanon and Greece. “Think Twice”, her second solo exhibition in 2015 at Exode gallery, Ashrafieh, presented 28 paintings on different mediums & 2 installations. In 2014, she exhibited her art installation in “Museum of Immortality”, at Ashkal Alwan & “Experimental Arts III”, organized by the Lebanese Artists Association (LAAPS). Her first solo exhibition “Metamorphosis”, 2013, took place at the Unesco palace, Beirut with paintings & installations. She participated in many collective painting, sculpture & installation exhibitions in Lebanon from 2008 till the present day: Ashkal Alwan, Mishkal festival, “Prie” design for Beirut marathon, “Age of recycling” at MACAM, Unesco palace, Zaytouna Bay, Cheriff Tabet Gallery and many more, and in three international art symposia: Aley, Ehden & Athens. In her work, Assoury uses different mediums to represent her ideas: drawings, paintings, sculpture, photography, installations, sound art and video art.

Statement:
“Art for me is what highlights every day’s facts, especially what is beneath the noticed and the unnoticed, the seen and the unseen, the heard and the unheard. I believe that art emerges from the influence of the psychological, environmental and perception of the artist. Art must be free and genuine. The choice of the medium in my work depends on the concept I am working on, I don’t really like to be stuck in one kind, or to be labeled depending on the medium I use. I always try to experiment new techniques, to use different forms for the execution of the artwork and to avoid repeating myself even if the concept remains the same. I was exposed to many mediums in my work, from painting to sculpture with different materials, to installations. Lately, I have been using sound and light as medium and as space, to create a perception-dependent installation. My scientific background as a medical lab technologist helped me a lot in understanding the medium I use and the art-related part pushed the limits of the usual use of it in order to represent the concept I have. I try to visualize what is invisible or materialize what is immaterial.

Why did I choose art? In a world full of judgments and stereotyping, I try to overcome my fear when it comes to new challenges and to be as genuine as possible. Revealing the truth of what is “masked” inside of us and highlighting what most of people don’t pay attention to, interests me. The interaction between the artist and the viewer through an artwork is an important key for perception. In addition, I chose art because it is a combination of truth, freedom, passion, new experience and emotions.

Current project and concept: What I have been working on lately is the relationship between environmental sounds, memory and visual perception. Sounds and images can shape the person’s attitude, mood, decisions and perspective. Sounds invade our privacy & space, noticed or unnoticed, with a cumulative/overlapped effect. They are influenced by memory, layers and present facts, in a continuous change. The purpose of this current work is to expose the viewer to a new experience, linked to her/his own memory and to her/his own perception, to understand better the complexity of the “new” possible sound/visual aesthetic languages, to make visible what is usually invisible.”